I packed up everything that was so incredibly important to me for the past 3.5 months, everything that I didn’t even know how to properly use a year prior but now ensured my survival in the wilderness. Disheartened, I walked back to the little store in Toulomne Meadows, planted my feet on the curb, and faced north to stick my thumb out at the drivers heading south.

I don’t remember how long I stood there. 20 mins? An hour? More? I just remember trying not to cry as I, occasionally, saw a hiker I recognized and waved at them (this wasn’t often because most of the hikers I knew were way ahead of me by now; my injury took me off trail for a few weeks and when I began hiking again, I was still constantly in pain, and therefore, very slow). I remember getting a hug from Lapsang, whom I’d hiked with for a day and spent a few days in Bishop with. His parents were visiting, and he was showing them around Tuolomne as they gazed at their son proudly. I told him I was leaving. Saying it out loud hurt. Every word felt like a hammer pummeling me on the head, like a pickax beating down on a boulder until, finally, it gives way and crumbles . I rushed my goodbyes and went back to pleadingly gazing at every passing driver with my arm outstretched. I didn’t want to go home but neither did I want to be there, where happy hikers and proud parents explored Yosemite before wishing their children a pleasant journey as they embarked on the more-than-half of the hike that they still had the opportunity to experience. Was I jealous? You bet.

A man in his late 50s/early 60s pulled into the parking lot and told me that he had some shopping to do but could take me southward in a little bit if I hadn’t found a ride before then. I accepted the offer, and when he was done and I was still there, got into his car. He headed toward Yosemite Junction (a much easier place to catch a ride), from where I told him I’d continue hitchhiking to Lee Vining and further south as he went on his way to Nevada. We saw another hitchhiker–a hiker I recognized–and I asked him if he wouldn’t mind picking him up too (I knew I’d feel safer as well). He turned around and came back for him, and I found out that that hiker–he’d never acquired a trail name and just went by his first name, which I’m not entirely sure about so I’ll omit it–said that he was getting off trail too, but to climb instead of hike. He said he was bored of the PCT. He didn’t like it much. I was astounded. My heart was ripping in two at the thought of leaving this beautiful trail, and here was a person who didn’t enjoy his time on the PCT at all. I get it, to each his own, but man… I wanted to throttle him, haha.

We dropped off the hiker I, luckily, refrained from throttling at the junction, and I got out to continue hitchhiking, when the man driving me said that he was in no rush to get to his hotel in Nevada and wouldn’t mind hearing more about the PCT if I’d let him drive me a little further south. He hadn’t made me feel uncomfortable in any way and seemed like a kind person (he even came back to pick up the hiker I recognized), so I said, “Sure, thank you.” It’d save me time searching out another ride. He drove me to Mammoth, bought me a crepe, and then he said asked for a hug as we said goodbye. As I leaned in for the hug, he planted a sloppy, wet kiss right on my lips. I pulled away and stood there blinking, mouth open. He began joking about how he wished he had a hotel for us here in Mammoth instead of in Nevada and how he really hoped he’d see me again, and could I give him my contact info, but I hurriedly grabbed my piece of cardboard with “SOUTH” scribbled on it and my hiking poles from his trunk. I was so shocked I was speechless. Laughing nervously (something stupid I can’t help but do in situations like this), and walked off. 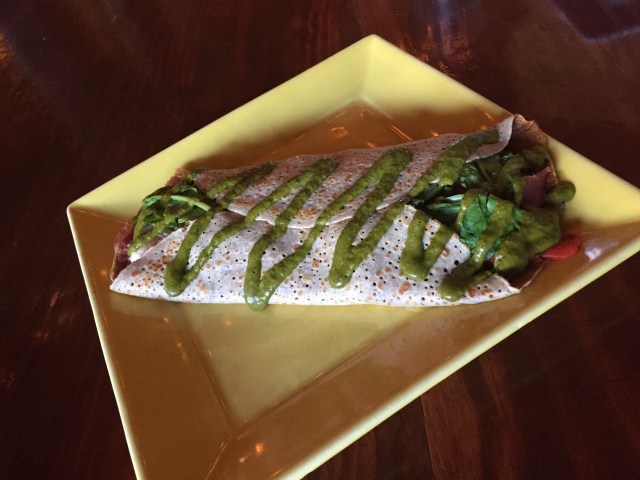 I stood beside a freeway on-ramp where people were heading further south. Eventually, after being ignored too many times, I walked onto the freeway itself, on the side of the road, a quarter of a mile from the on-ramp. A kind woman just a little older than my mother pulled over and offered to take me to Bishop, saying that her motherly instincts kicked in and that she hoped her daughter would never hitchhike and that I better know how to use a gun. She dropped me off, and I continued hitchhiking from Bishop.

A woman in her early-to-mid 30s stopped and told me she’s headed a good amount south and would consider giving me a ride, but she first has to get a feel for who I am as a person before I get in her car. I raised my eyebrows, wondering what she was going to suggest. “I’m hungry. Let’s grab a bite to eat,” she said. She drove us to a restaurant in Bishop that I’d just been to with my fellow hikers a few weeks ago. She ate, we chatted, and as she paid her bill, I asked, “So…did I pass the test?” “Definitely,” she answered. “So, here’s the deal. I’m headed all the way to Los Angeles and can drop you off anywhere on the way there. But I’m stopping by my house first, which is halfway there, and spending the night, before going to LA tomorrow. I’m extending the offer to you. I just first had to see if you’re the kind of person I’d like to invite to my house and spend so much time in the car with. And you definitely are.”

And so I showered, spent the night on a comfy couch in the room where she keeps all of her musical instruments (she’s a naval surgeon but a musician in her spare time), ate the lovely breakfast she made for us the next morning, and ended up home, in Los Angeles, where I’d stay with family (I left my home and job in Big Sur to go hiking and had nothing to come back to) until I healed and figured out what crazy thing I was going to do next.

Note: This is an old entry from a journal I kept while hiking the PCT in 2016. I am no longer on the PCT and had to get off of the trail due to my injury in late July. I wanted to share with you my last few days on the trail and explain how difficult of a decision it was to go home.

I’m Elina Oliferovskiy, a Russian-born 27-year-old restless soul who’s never really found a place to dig her roots in deep ever since I moved to the United States in 1998. I move every year or two, backpack for months at a time, and occasionally live and travel in a motorhome--and I (usually) love every minute of my (somewhat) nomadic lifestyle. Feel free to follow along on my journey by reading my blog!
View all posts by elinatravels →
This entry was posted in On Foot, pacific crest trail and tagged adventure, adventuring, backpacking, big sur, bishop, california, free spirit, going on a trip, healing, hiker, hiking, hitchhiker, hitchhiking, journey, leaving the pct, long distance hiking, mammoth, musician, nature, nevada, outdoor gear, pacific coast trail, pacific crest trail, pct, pct 2016, pct class of 2016, pilgrimage, through hiking, through-hiker, thru-hike, thru-hiker, thru-hiking, travel, traveling, yosemite. Bookmark the permalink.