But wait! Before I tell you all about the road trip, the towns and national parks and adventures we’ve had in the RV, I need to introduce you to the RV herself. Actually, her full name is Fiona Harold Pendragon IV, if you’d like to know. Where did we come up with such a ridiculous name? Let me tell you that story.

The previous owners live in Eastern Idaho and we drove all night for 8.5 hours from Bend, OR to make sure we were the ones to buy the RV of our dreams–the Safari Trek–before anyone else even noticed the Craigslist post that popped up just that day. We arrived, and were greeted by a super sweet middle-aged man on a gorgeous, spacious, green property. Before offering to let us give it test drive, he spent two hours showings us most of the bells and whistles that came with the now-somewhat-of-a-collectible-and-maybe-a-little-vintage RV.

The only thing we didn’t like (and this is important to only those of us who care about such silly things) was that he had named the RV a less glamorous name: “Shrek,” (Get it? Safari Trek = Shrek?) and had a human-sized stuffed Shrek doll in the passenger seat when we came to look at it. Well, there was no way I’d call my beautiful new home “Shrek.” But to honor the previous owners, who took really good care of the RV and were kind enough to let us camp on their property overnight, we decided to keep the name in the family. Shrek was married to Fiona, and that is a much better name for a car, in my personal opinion. And because I’m weird and wacky and like to complicate things (my old car was named “Ulrich Alaricus the Third” because those names meant “trustworthy” and “dependable” and I was the third owner; don’t worry, I called him “Ully” for short), I decided to research what Shrek and Fiona’s last name was. 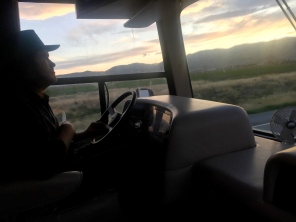 Turns out ogres don’t have last names or something, but I did find out that Fiona’s father’s name was Harold and her cousin’s last name was Pendragon, so it’s quite likely that she had the same last name as her cousin, right? And that she chose to keep her maiden name upon marrying someone who didn’t have a last name? I think that’s pretty reasonable (just defending possibly bad storytelling and the omitting of terribly useful details). Oh, and we are the fourth owners, hence the IV. And there you are have it.

Safari Treks originally had a painted image of a wild animal on the back of each RV, but these images faded, cracked and peeled over time, and now there’s a big, blank spot that I considered utilizing for a painting of a regal-looking Princess Fiona (the non-ogre version) riding a dragon. While I do paint and rather often, I have never painted on a vehicle and never a DreamWorks’ princess, and I quickly realized that I would need a good amount of research, time, and some new supplies to accomplish this feat. I decided traveling was more important.

But I’m sure you’d rather know all about the features within the RV and not just her goofy name and history of pampering. Well, I did mention that we are the fourth owners, but luckily for us, the three owners before us each took her on one trip only, and our 1996 Safari Trek had a whopping total of 26,000 miles on her. As a result, the lack of wear and tear on the interior was an extra bonus. The wooden cabinets, sinks, shower, and furniture were in great condition, as you can see. 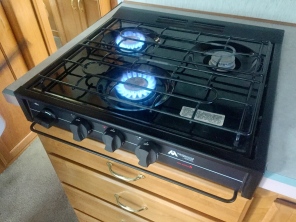 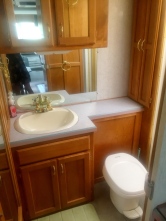 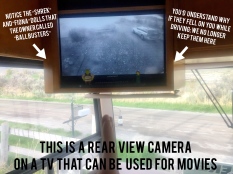 These photos were ones we took when we first came to check Fiona, and I have since beautified the interior even more so while living in it (I had to cover up that boring, gray upholstery). I plan to eventually make a walk-through video, so stay posted if you happen to be interested in buying a motorhome soon for yourself.

Oh, and before I go, I thought I’d fill you in on how our camping trip went the night that we stayed with the previous owners of the RV. We stayed in a spacious camping spot on his property, all vinbrantly green and grass-covered. Turns out, he rents the spot out for events such as the recent eclipse on Hipcamp.com, a website where people book a campsite not just in national parks and designated campgrounds, but also on lawns and in the backyards of people’s homes.

I knew we would camp that night and so I grabbed a few things so that I could cook in the RV. We were in a rush to make the long drive, so my options were limited to what I had at home. I grabbed canned soup and potatoes. The canned soup, I warmed up on the stove in the RV, but the potatoes, I threw in the fire pit outside, wrapped in tin foil. We didn’t have anything to pick them up them with when they were ready, so I used a twig to flick them out of the fire and onto the (covered in dew and not likely to catch fire) grass, and my boyfriend ran around collecting them into a pot with a spoon. When they cooled a little, we opened up the foil, made a dent in the potato with a spoon, and put butter and salt inside. You all know how to eat potatoes from the fire; I’m sure I don’t need to tell you. Anyway, there was a mishap. With us, there always is. 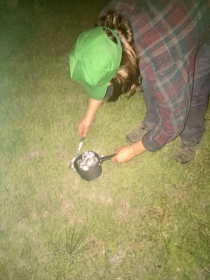 No, we didn’t start a fire. We had two huge buckets of water to drown the fire out before we went to bed, don’t worry. It was a mishap of another kind. Not knowing how to use anything in a motorhome yet, we left something on and ended up stuck on the property with a dead battery. The owner of the place had left to a doctor’s appointment three hours away (he lived in the middle of nowhere) and when we called him to tell him what happened, he sent over a friend (a cowboy with duct tape keeping his boots together) to help us out. The friend struggled for some time trying to figure it out (there were two sets of batteries and he didn’t know which ones he had to jump), and someone who knew him happened to be going by on his motorcycle, spotted him, and offered to help out as well. The two of them were incredibly kind, walked us through what we did wrong, showed us a few things we didn’t know, and brought Fiona back to life, following us out of town afterwards to make sure all’s well. 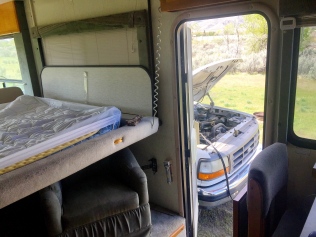 You’ll soon discover that a dead battery in the most isolated places at the most inconvenient time is a fun pattern of ours.