“Is Banff National Park Beautiful?” See For Yourself!

Posted on September 6, 2018 by elinatravels

While traveling in Canada this past month, occasionally I have family and friends ask me, “How’s Canada? Is it beautiful?” Knowing that words won’t do it justice, I wish I could just send photos in response. Alas–free roaming calls, texts, and data with AT&T does not include multimedia messages. Besides, a blog post is so much more detailed!

I thought I’d start off with a summary of (summary? oh, who am I kidding? I can’t summarize! I ramble on for hoursss) the cities and towns I visited in Canada thus far, but my photos of Banff begged to be shown first, especially with the humorous amount of “Is Canada beautifuls” that I’m getting lately.

If you read my previous blog post, you’ll find out why we ended up skipping Jasper during this particular road trip (hint: too many fires nearby). Banff happened to be mostly unaffected by the smoke for the four days we spent there. It began creeping back in on the evening of the fourth, so on the morning of the fifth, we left and continued east (the convenience of having no set plans, hotels booked, etc.).

While in Banff, on Day 1, we hiked to Lake Louise from where we parked the RV (about 5 miles?), sat down for a packed lunch while hoards of tourists milled about the lake incessantly, and then did another hike around the lake itself. There were teahouses you could hike to, and while that’s a lovely idea, we already had our own hot tea in thermoses with us. The arch of my foot began acting up midway (something that’s been happening every once in a while since hiking the PCT), so on the way back, the boyfriend hiked while I hitched a ride back from a kind stranger. 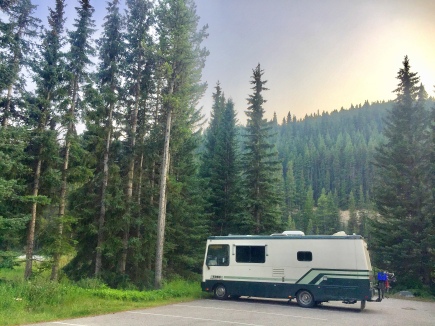 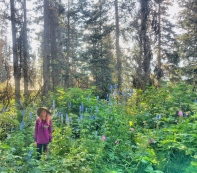 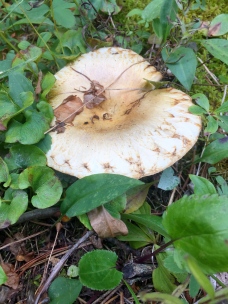 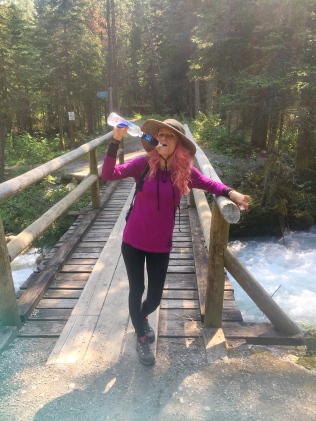 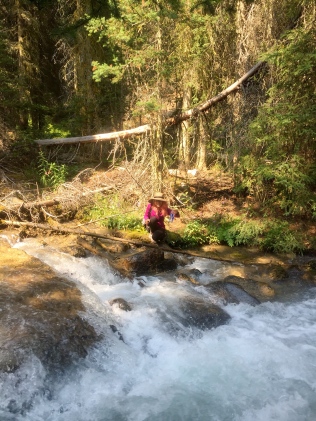 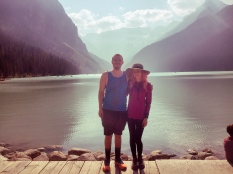 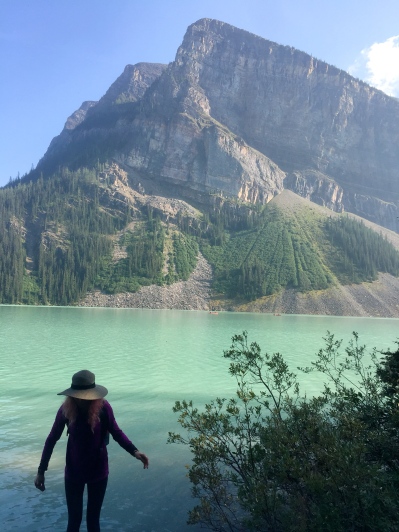 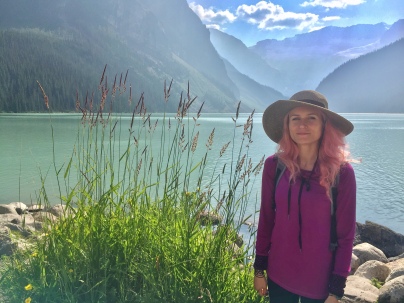 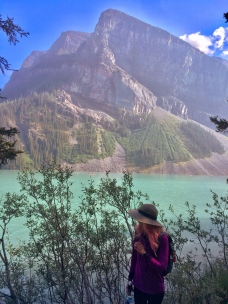 On Day 2, we were a little sore (sitting around the RV for weeks and then doing two hikes in one day will do that to you) and my arch still hurt, so we stayed in watching movies with a healthy home-cooked lunch and dinner. In the evening, we went out to find appetizers or drinks someplace, but decided to avoid the crowds and crazy prices (a cocktail alone was $25+!) and went for tea and dessert in a mostly empty hotel restaurant instead. A pleasant, quiet day, just the kind we wanted.

By now it was Day 3, and we drove up to Lake Moraine (hiking it would’ve been 15 miles or so and I’m telling you, we’ve turned into soft, lazy people!), which in my opinion, was even more beautiful (and way less packed with tourists) then Lake Louise. I would’ve spent all day there but the mosquitoes were pretty vicious at both lakes once it cooled down. And once we had taken that steep uphill drive to the lake, it got late pretty quickly as we had to wait until 7PM; we were told parking for a vehicle our size would be nearly impossible any earlier. We hurried back to the RV and thought we’d head to our usual camping spot for the night. Aaaaannnnnd the RV didn’t start. We were the last ones there at this point and had to call AAA for a jump start. (You’ll soon discover that this is a pattern.) 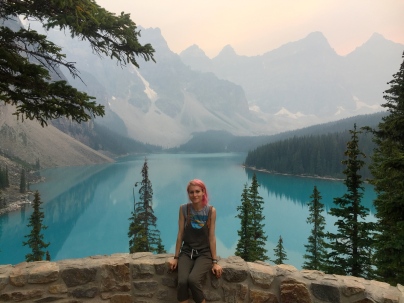 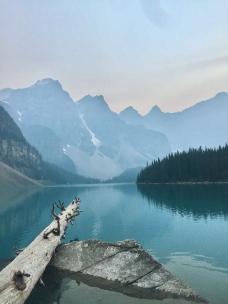 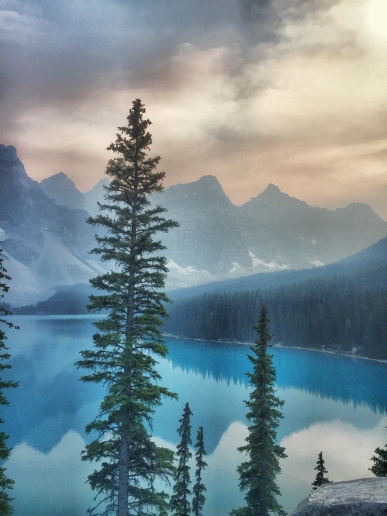 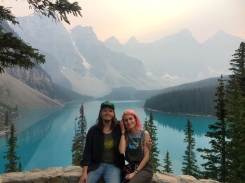 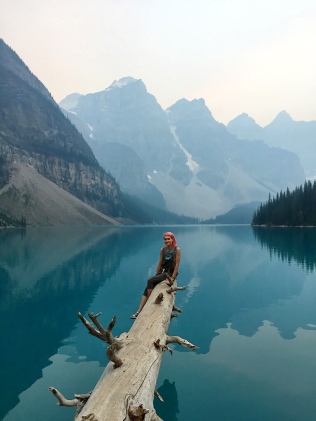 Day 4, our last day in Banff, we chose to spend it in town. We visited coffeeshops, tea shops (we stocked up on some interesting flavors of loose leaf tea at Banff Tea Co), museums (we read the bizarre story about the prisoners who built the national parks in Canada at Banff Park Museum; the particular book I skimmed through is this one), wandered around the Cascade Gardens, and did the short little hike to Bow Falls (a simple hike that is mostly just a dirt trail with rails and stairs, but the arch of my foot has been having problems and so I had to stop more times than the elderly hikers who breezed past me) from where you can see the castle-like hotel peeking from behind the trees. 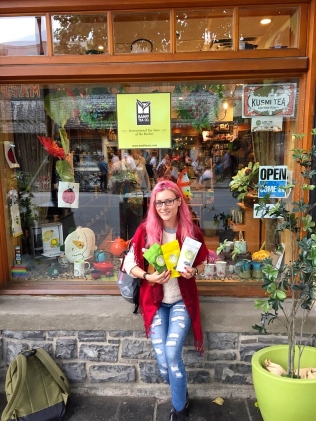 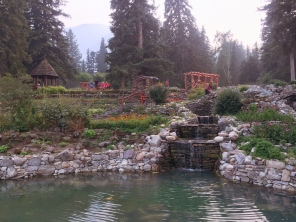 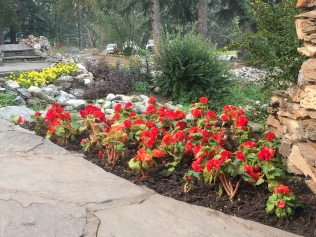 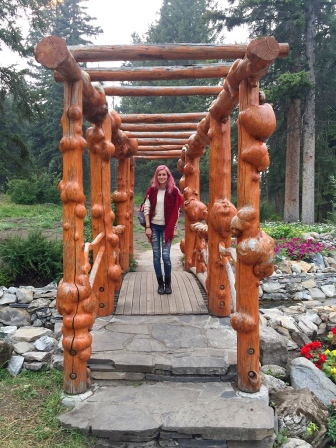 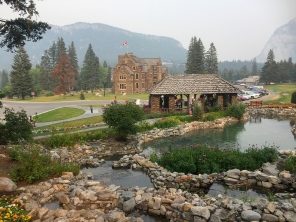 Afterwards, we thought we’d take a look at one of the local hot spring options, Banff Upper Hot Springs, but it turned out to be just a huge man-made pool with 100+ people sardined together, and we opted to skip out and find another hot spring elsewhere later on in the trip, hopefully one in a more natural environment. While taking a peek at the jam-packed pool, I found some pamphlets on horseback riding (and for a reasonable price too!) and visiting sled dogs during their off season. I wanted to stay and do both, but, by now, Banff was getting clouded up in gray smoke again. Besides, after needing help starting up the car the previous night as well as a slough of other issues, we wanted to get to a bigger town where we’d scheduled an appointment at Big Dog Performance (yes, that’s really the name of an auto shop in Calgary) to have Fiona the RV looked at. Well, Fiona wanted to make sure that we wouldn’t put off her appointment any longer by demonstrating how much she needed it.

At about 9PM, on the top of a mountain, with nothing but a hotel and the hot springs nearby, our Trek didn’t start up again–for the second night in a row. We asked a couple in an idling car for help, and after charging us up for a half hour, the RV still didn’t start. We felt bad and sent them home. By now, the last business still open, the Rimrock Resort Hotel, was going to close in 20 minutes and we ran inside to see if anyone could help us out before they all left for home. A concierge who just got off his shift used his MotoMaster 1200 A Battery Booster and got us going again. We decided not to risk getting stuck anywhere else again; we headed straight for Calgary that same night.

4 Responses to “Is Banff National Park Beautiful?” See For Yourself!