So, most of you know that I attempted to walk to Canada from Mexico in 2016. This was when I was hiking the PCT and I documented it most of it here. As I’m sure those of you who followed the story remember, I borrowed a bike on a grocery run and fell off of it, hurting my tailbone pretty badly and having to get off trail about halfway to Canada.

When I was at mile 454.4 out of 2,650, camping at Hiker Heaven (a lovely trail angel’s home that provides room to camp, mail services, WiFi, a movie room, and so much more), I got a call from my truck driver uncle whose route often takes him from Southern California to Northern Washington. Before I could say, “Hello?” he asked me, “Is your roof sliding?” which, is a Russian phrase that means, “Are you crazy?” I asked him if he’s referring to my attempt to hike the PCT, and he said, “Yes! If you want to get to Canada that badly, I can pick you up and drive you there!” I laughed and said, “But the whole point is to walk there. To know that I walked from the Mexican border to the Canadian border.” He didn’t get it.

Well, I didn’t make it that year. I hope to one day still do so. And on foot, not while hitchhiking with my truck driver uncle. 🙂 But to his relief, I did actually end up finding myself taking a set of wheels to Canada–though this time, my own.

As my previous posts explained, my fellow adventure buddy and I bought an RV and decided to drive around the states and Canada for several months. Finally, I get to explore the country I thought about every day with every step on the PCT. And the best part? I will get to see much more of it than I would have during the few days I’d have traipsed around on foot and via hitchhiking in/around Manning Park (near the border where the PCT leads to).

Our initial plan was to visit Vancouver, Squamish, Whistler, Banff, and Jasper–with stops in other towns along the way where we decide to take a break. Unfortunately, after visiting Whistler and heading east towards Banff, we got tired and ended up staying the night in a very smoky town called Kamloops where we found it difficult to breathe due to all of the fires nearby (not only fires in Canada but also, apparently, we were told that additional smoke was coming into Canada from Siberia). Afraid that it may be the same in Banff and Jasper, we gave both National Parks a call and were told that “we may not want to come right now because the smoke is pretty intense.” 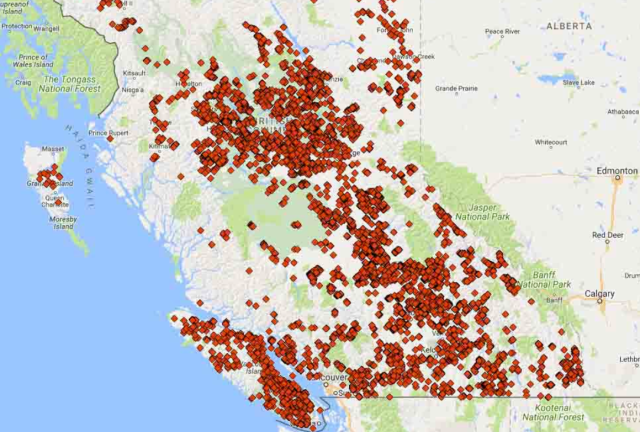 These are all fires in Canada that occurred that particular smoky day!

Bummer! Our main reason for visiting Canada was to see these two National Parks; we heard so much about them and they sounded incredibly beautiful. Oh well. We’re adaptable. We didn’t have anything booked anywhere and agreed ahead of time that our itinerary be flexible. We know that some people like to have everything planned out and stick to a specific schedule, but I’d been on such an RV trip before (when I was 20 and I traveled for 1.5 months in a 30’+ RV that somehow fit 9 people and a Chihuahua!–another story for another time) and I developed the personal opinion that spontaneous trips are much more fun. Okay, Banff and especially Jasper we were told to save for a future trip, so why not go somewhere else instead?

I had just recently finished reading a wonderful book called The Tricking of Freya by Christina Sunley that takes place mostly in Gimli, an Icelandic community on the west side of Lake Winnipeg in Manitoba, Canada. Wouldn’t it be amazing to go see the place one of my new favorite books described in such detail? I could relive the story, experience snippets of what the characters experienced. What a romantic idea! So Gimli went on our mental map of “Places to Go” and we headed east towards Manitoba.

We would end up crossing through Banff anyway, so we thought we’d camp there when we got there late at night and see how bad the smoke was the next morning. Luckily for us, it rained all night, and in the morning, most of the smoke was gone! Some could be seen in the distance, creating a hazy glow around the mountain peaks, but we weren’t breathing any in town. Obviously, we couldn’t leave now. So we decided to stay in Banff for four days. On the morning of the fifth day, the air coming into our windows smelled of campfire again and we knew it was time to go. Skipping Jasper, we drove east to go find clear air and blue skies once more.

This is a map of the fire danger rating in Canada.

My next few blog posts will be about the large cities and tiny towns we visited along the way: Vancouver, Squamish, Whistler, Lillooet, Kamloops, Golden, and Calgary. And of course, there will be an entire post on the beautiful Banff National Park.

But, alas, I am dependent on the WiFi of the little mom and pop shop type cafes I love to visit occasionally. And about half of the time, their WiFi doesn’t even work. 🙂 So please bear with me as I slowly get my stories out. Just know that when I’m not on here writing blog posts, I’m having fun exploring some new place somewhere probably not even on my list but which just happened to catch my eye while passing by! As some of the best adventures tend to begin.